I watched the three part Beatles documentary Get Back on HBO this weekend. It was most interesting.  Chronicling the final weeks of the band, we see the various personalities on display.
Several things struck me. Even though I have read several biographies of the band and members, the video and audio recordings show a somewhat different interpretation. For instance, I always thought John was a pompous ass. In truth, Paul was far worse. McCartney tries to force everyone into his vision, other opinions be damned.
John was actually pretty funny. I’d never guessed it was him on the guitar solo on Get Back.
It was interesting that bandmates often referred to Ringo as “Rich” or “Richie”.
I was absolutely riveted by the songwriting process. I often talk with my son about this. Is it music or lyrics? Both he says. As a man without the creative gene, I love seeing how art comes to life.
Common history has led us to believe they all hated Yoko. Instead she sits silently by John’s side most of the time. Yoko talks with Linda. Ringo shares his gum. There is no overt hostility at all. She certainly never interjects herself into any band business discussion.
What we see are a group of unbelievably talented musicians who don’t like each other much anymore, until they get to the music. Then, you can see the joy and fun they had playing music. Together.
One thing is for sure, few people in history have had to deal with the weight of fame endured by the Fab Four. It is a wonder any of them adjusted to life after The Beatles.
Posted by Joe at 7:34:00 AM 2 comments:

Meet me in St Louis

Yesterday evening the daughter and her family swung by to pick us up to take us along for a drive-through Christmas light display. We stopped for some Shake Shack burgers on the way to eat in the car. The display wasn’t as good as the one we did last year at the State Fairgrounds, but we enjoyed it and the grandgirls had a ball.

After we got home we got out the ornaments and decorated the tree. I must confess, hanging the ornaments is not one of my favorite tasks, but I do enjoy looking at them and the nostalgia they stir. Starting as far back as the earliest Christmases, we have bought each other ornaments. In the past few decades that has evolved to the wife buying a new one or two every year. At this point the tree is crowded with well more than a hundred ornaments of every variety.

We still need to put the garland on the stairs and mantle. Then the wife will start placing her collections of snowmen and Santas, turning the house into a Christmas wonderland.

Most of the shopping is done, so that will soon be out of the way.

I’m sure I will get a few not-so-veiled hints that the leaves need raked again today. I will probably ignore the suggestion.  In the meantime, my coffee is getting cold.

Have a great Sunday, meine freunde.

The packaging engineer at P&G who designed the new snap closure on Crest needs to be flogged. It is impossible to close the tube without squeezing in the middle. Everyone knows squeezing the toothpaste in the middle is uncouth, evil, wrong, and a capital offense. There is no argument on this. Some of you heathens may roll your toilet paper from the back or might even eat ketchup on a hot dog. But squeezing the toothpaste anywhere but the bottom is unforgivable.
This new cap upsets me enough I might switch to another brand of toothpaste. I’ve used Crest for my entire life and P&G is about to destroy nearly sixty years of loyalty to save a fraction of a cent. 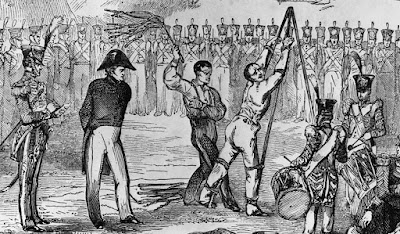 How dare you make such an indecent packaging change. Five hundred lashes! And lay it on strong, corporal.
Posted by Joe at 7:43:00 AM 4 comments:

Whew! What a great Thanksgiving. I cooked up a feast yesterday. Turkey, potatoes, noodles, rolls, green bean casserole, candied yams, deviled eggs, mac and cheese. My daughter contributed cornbread stuffing, cranberry sauce, and a pumpkin cheesecake. I also made up some pretzel dip and a cheese board to round out the carbapalooza.
After dinner the granddaughters put on a show. Then they played while we watched some football.
Then it was time to clean up the mess. That sucked, but it was worth it. It was after 11:00 PM when the youngest came by after work to grab some leftovers. He was worn out too.
Today I will put up the big tree in the living room. The holiday fun has kicked off in a grand fashion. I hope you had a great Thanksgiving too.
Posted by Joe at 8:25:00 AM 2 comments:

I do have plenty to be thankful for.

Thank you all for reading my drivel.

Now I have dinner to cook.

Get of the internet and watch a parade or something.

Thanksgiving will be at my house this year, the first time in several years. It will be a good get together, but a hard day nonetheless. Tomorrow would have been my grandson’s fourth birthday. It will be my first thanksgiving without my dad. My oldest son is in Colorado. The youngest has to work.
Aside, I know it is convenient, but could you keep in mind the chefs, cooks, servers, busboys, dishwashers, and hosts all have to miss out on their family gatherings so you don’t have to cook or clean up the mess?
So the feast will be my just daughter and her family, my wife and me. It will be nice, but the shadow of loved ones not present will subtly linger over the turkey.
Posted by Joe at 6:40:00 AM 2 comments:

Wherein I complain (a new phenomenon around here)

I ain’t happy about it. It cannot be helped. Here I am up at way too early. I have already done a couple hours of honest work. Quotes sent, orders entered. Now I turn my attention to the old blogeroo.

I still have to make a feeble attempt to entertain you, take a shower, and hit the road to Louisville for a couple of meetings this morning. The challenge will be staying awake on the drive home. If you see me weaving across lanes on I-65 northbound this afternoon give me a wide berth and cut me some slack.

The boss and I made a fruitful visit to the greater boot toe region of Hoosierdom yesterday. A new equipment order came out of it. More expensive capital equipment orders are likely to follow. That is a good thing when you are grubbing for commissions (spit). I hate working for a commission. I never understood why companies think a salesperson won’t work hard unless you pay him extra? We don’t put engineers, accountants, or HR people on commission do we? No, we expect them to do their dang job.

Sure, I probably missed out on some giant payouts when I worked most of my career as a salaried salesman*, but I like the regular paychecks.

Lest you think I complain too much (I do), I am more than grateful for my current job, low base pay plus commission. It is far, far better than the big box home improvement store or the short-lived lizard insurance gigs I toiled at for the past couple of years.

I’m off to get ready for my road warrior act. Have a great day.

*What is 1 or 2 percent of a $35 million dollar territory anyway? Yeah, now you know why I was on straight salary.

Older Posts Home
Subscribe to: Posts (Atom)
Consider everything here that is of original content copyrighted as of March 2005