Killers in our midst

I enjoy reading many blogs, and here is one that sums the current terrorist situation as well as any. He has reached the same conclusion as many others, including me. Islam is not speaking out, it is not cleaning its own house and we must be willing to do it for them.

It is not the policies of the US or Briton that causes these attacks. It is not Israel. It is not Christianity. It is not blue jeans, or rock and roll, or women in pants. It is not oil or pornography. Terrorists do not attack because of movies or cars or money. Civilians are not beheaded and murdered and bombed because we toppled a dictator. We are not attacked because we supported or did not support Iran, Iraq, or the Taliban. The attacks on 9/11 were not caused by American policy, or the Cold War,or Vietnam, or the Philippine War. Islam is a religion that decrees you convert or die. Again I dare anyone to prove it is not in the Koran. We are attacked because the radical believers in this religion are jealous, fearful and filled with hate. 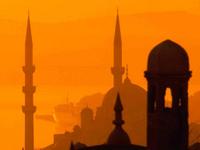 "Annihilate the Infidels and the Polytheists! Your [Allah's] enemies are the enemies of the religion!" said Suleiman Al-Satari in a July 8 broadcast translated by Israel-based Palestinian Media Watch, or PMW.

"Allah," the cleric continued, "disperse their gathering and break up their unity, and turn on them, the evil adversities. Allah, count them and kill them to the last one, and don't leave even one."

America represents everything evil to them and we must be destroyed. Speak up, prove me wrong.
Posted by Joe at 3:01:00 PM