Early in the 1980s my girlfriend and I went to the Elliot Hall of Music at Purdue to see a concert. EHM is a formal auditorium designed for choral and philharmonic-type concerts. 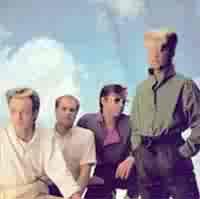 We were going to see the Flock of Seagulls and the Go-Gos. Yes, my girlfriend (now my wife) loved these new wave type bands. She had the big hair and the mini skirt and was looking hot. I was dressed in my normal manner at that time -- jeans and a t-shirt. I am confident I wore either Asics (Onitsuka) tennis shoes or work boots. Yes, faithful readers, I was grunge before grunge became popular! The sad fact is I dress pretty much the same today. My hair was short and cut conservatively unlike the guys in the warm up band (FOS).

We got to our seats, and there was one guy between us and the Aisle. You know the type -- he heard concert and he was going! Long hair, jeans, stoned, he looked more like he was going to see Ted Nugent or Rush, rather than some semi-punk bands. He looked at me and shouted "party!" He offered me a hit from his hip flask. I politely declined. I guess he thought I was one of his type. He was probably right.

Most of the crowd was dressed in the style of the day -- funky hair, bright colors, long suit coats, baggy pants. The girls sported big, curly hair, miniskirts and tight pants. There were a few jumpsuits and lots of taffeta. Bangles and bracelets adorned every female arm. Granny boots and brightly colored tennis shoes were the order of the day. Bows sprouted from hair and shoes.

The lights dimmed and the band started playing. Some people began to slam dance in the aisles. This is the precursor to today's mosh pit. Of course everyone was standing. Sometime during the concert, I am not sure when, but I think early, the party guy next to me leaned over and said "The next one of these assholes that bumps me, I am going to deck him". I have to be honest, I am a little fuzzy on most details of the concert. I am 90+ percent sure I consumed a lot of beer the afternoon of, and on the way to the concert. That is how I spent nearly every weekend and most weekdays at that time.

I remember bopping to the beat, enjoying myself when I felt a push on my left side. I turned just to see the party guy reach back and punch some spiked hair, leather wearing student right in the nose. Blood erupted all around. I put my hand out to push my girl back, I moved to the the defense of the party guy. There was no way I was going to watch someone go down in a 6 to 1 fight. He pushed on another guy and shouted "I said just stay away from me with that crazy dancin' shit". The dancers backed slowly away from this madman.

For the rest of the concert we had a bubble of space around the end of our row as the slam dancers banged into each other elsewhere. 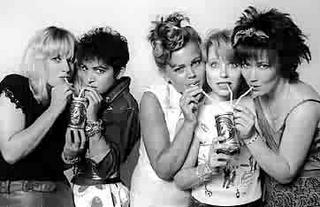 Man, I love the Go-Gos! I saw them with the Pretenders at a Day On The Green concert at the Oklahoma Zoo Ampitheatre in 1980 (or maybe 81). The beer truck sold beer by the plastic gallon milk jug, and I had like three.

I can't imagine a concert in Elliot at all.... seems so stuffy and uptight.

WHOOHOO! Heehee, thanks for posting on your 80's experience and stopping by my bloggy =D