Screw you NCAA (or am I allowed to use those letters in that combination without paying you a fee?) 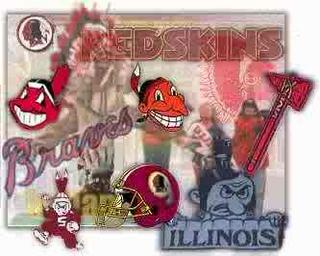 Once again Political Correctness has run out of control. It is no secret that America's Colleges and Universities are among the most Liberal, Left leaning bastions remaining. Colleges are all for Politically Correct Speech (as long as it is "liberal and left leaning). Now the NCAA has decided what is best for everyone by banning "hostile mascots".

"The NCAAA's executive committee decided this week the organization did not have the authority to bar Indian mascots by individual schools, committee chairman Walter Harrison said today in Indianapolis...'What each institution decides to do is really its own business outside NCAA championship events.'"

How long do you think this will last? It is only a matter of time before the NCAA insists these mascots and nicknames are gone forever. This body has gone so far as to control how you say their name, refer to their tournaments, and has tried to drive competing tournaments out of business. Now they want to tell member schools how to refer to themselves? Some individuals are not offended by Indian nicknames, are we to tell them to piss up a rope?

Is it the NCAA's ideal that all the teams have stupid names like the "Red Storm" or "Golden Eagles" WTF? Do we need more bears, bobcats, and lions? Aren't there enough tigers, spartans, owls, and bulls? Will Notre Dame have to change its mascot -- "Fighting Irish" has a negative connotation? Will PETA protest because depicting animals as vicious and aggressive violates the animals' rights? After all a grizzly bear is just protecting its territory and cubs! The label "Giants" makes fun of persons with growth hormone problems. My high school nickname "Hot Dogs" likely will offend vegetarians. Is there a single mascot out there that is not offensive to someone or so stupid that no one gets it (again "red storm")?

Where will it end? How far do we have to go to make sure no one is ever again offended or made to feel uncomfortable in this society? Can we point out that all suicide / homicide bombers since 9/11 have been Muslims? Can we state that some kids are dumb; that some homeless people are just bums and like it that way? The First Amendment gives us the right to say what we think. It does not mean we have to like what others say. Give it a rest. Indians/Native Americans/indigenous peoples, whatever, your stereotype is a brave, fighting, worthy foe. Did it occur to you that maybe the nicknames are an honor? Kiss my ass NCAA.
Posted by Joe at 12:33:00 PM

I imagine there are some cycle-worshipping feminists out there who might be offended by the term "red storm"...