Now that is desperate...

I was returning from a trip to Europe, many days in Holland. Long, boring, technical meetings followed by nights in the pubs and restaurants of Utrecht. It was time to go home. I took the train to Amsterdam's famous Schiphol Airport. It was midday as I boarded the USAIR flight home.

I was seated in business class, the area was mostly empty. It must have been a mid-week flight. There was a couple in the front left row. The same row as me (but staggered) middle section was occupied by an older German guy. He spoke German to the Attendant, and he looked exactly like the Burgermeister Meisterburger character in the Santa Claus is Coming to Town cartoon. 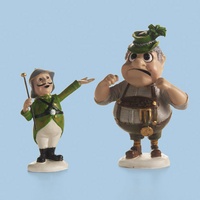 . I was on the right side of the plane and my friend Susan was behind me. We were the only passengers in business class.

We taxied out, and as often happens, the line to take off was long. All the flights to North America take off at the same time, so the taxiway was filled with jumbo jets. As we sat there I noticed the Burgermeister was figiting in the seat. He covered himself with a blanket and was messing around in his crotch area. I really thought he was jerking off. I was the only passenger that could see him as he removed the blanket and began to relieve himself into a airsickness bag. In doing so he pissed all over himself, his pants and the seat. He took pillows and used them as sponges to clean up the mess.

After we took off he rang the bell for the attendant and gave her the piss bag. He just handed it to her as if it were her duty to clean up after him. The Meisterburger then stood and went to the tiny restroom to wash off his hands (I hope). When he came back his shirt was wet like he tried to fake that the sink splashed him on the whole front. He piled the blanket and pillows on his seat and sat in the vacant seat beside.

I took that opportunity to turn to my friend behind me and point out in a semi-loud voice "Susan, that Dude just pissed into an airsick bag. He pissed all over the place. Can you believe it?" I know he heard me.

He deserved the rude treatment for banning toys and throwing Kris Kringle and that little penguin into jail. Stoopid Euroweenie.
Posted by Joe at 1:12:00 PM