YOU are the parent

I just heard on the radio that some advocate group are suing Kellogs and Nickelodeon to stop using cartoon characters to push cereal. No surprise these interfering do gooders are from the great liberal Commonwealth of Massachusetts.

"Nickelodeon and Kellogg engage in business practices that literally sicken our children," said CSPI executive director Michael F. Jacobson. "Their marketing tactics are designed to convince kids that everything they hear from their parents about food is wrong. It's a multimedia brainwashing and reeducation campaign, and a disease-promoting one at that. And parents are fed up."

Attention, PARENTS, you are in charge of your children. There is no North Korean communist vast right wing conspiracy brainwashing Chinese water torture plan to make your kids eat Apple Jacks. This is especially true of pre-teens. If you do not want to buy sugar-coated corn flakes for your kid, DO NOT BUY THEM. They will get over it. They will eventually eat the saw dust you want to shove down innocent little gullets if they get hungry enough.

A food industry-backed group defended the companies, saying the lawsuit assumes that parents can't turn off televisions, have no control over the food they buy and can't make their kids go outside to play. 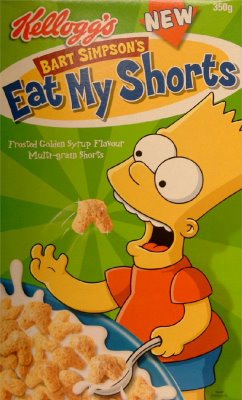 It is bad enough that we had to endure the name change of SUGAR smacks, and SUGAR Pops, do not take away the Tiger or those gay little elves that push the Rice Krispies. Crunchberries are now blue, there are too many colors to count in my Fruit Loops, and what is the story behind all the new and different shapes in the Lucky Charms? Getting rid of any cartoon characters on the cereal box is going too far.

If you do not have the strength to tell your kids no at the store, or when watching TV, or what cereal you buy, you have no business being a parent.

"The thrust of Nickelodeon's and Kellogg's likely defense will be to blame parents, since, after all, parents ultimately are responsible for their kids' diets," said CSPI litigation director Steve Gardner, lead counsel for the plaintiffs. "But then again, Kellogg and Nick aren't directing their marketing messages at parents; they're going right behind parents' backs. Parents are ultimately responsible for making sure their young kids don't get hit by cars. But if someone's recklessly driving around your neighborhood at 80 miles an hour, you're going to want to stop them."

Yes, but if allow your seven year old to play in the street, you are still responsible , even if someone is going 80.

What are you going to do when your little brat whines to try a cigarette or a beer? I can hear it now, "Oh what do I do, Suzy wants a cold Bud, it is not fair that they advertise during the football game". Give me a break you busy-body, liberal, spineless gash. You probably do believe it takes a village to raise your kid. Thank you, but I do not need the courts or the government to tell me what my kids can and cannot eat. Dry up and blow away you dumbass. Do you want to see how far these people want to go?

"In any other sphere of American life it would be considered creepy and predatory for adults to propose commercial transactions to toddlers and young children," said Jacobson. "Yet companies like Kellogg, Nickelodeon, and others have been doing it with impunity, and government has done nothing for decades. This litigation is truly a last resort, and vitally important to children's health."

These people want to equate advertisements for Barbie, Bikes, balls, Toys R us, and cereal as creepy and predatory. We need the government to tell us what to do every minute of the day -- It is for the the chillren. Honestly, given the vision of the future proposed by people like this, Orwell was mild. remember, every time you vote Democrat, you are encouraging this kind of stateism. Do you want the Government telling you not to use a certain fabric softener because it uses a teddy bear in the commercial? Maybe we should ban all makeup commercials because I have seen few women who look like a covergirl after they use the advertised lipstick.

These assholes should be shot, they are a danger to their kids and society as a whole.
Posted by Joe at 8:40:00 AM