Blame it on Otter

When I was a boy I loved war movies and cowboy movies. I spent many an afternoon glued to the TV to see Rowdy Yates in reruns of Rawhide.

I must have been about ten or eleven when I saw my first horror flick. The ordeal so traumatized me that I hate that genre of movies to this day. I have seen several scary movies. I thought the Exorcist was funny as hell the first time I saw it. Maybe the 12 pack or the drugs influenced that response, because the next night I went to see it again sober. I was so scared I could not put my feet on the floor. This was when I was in college!

One summer evening a century ago my brother wanted to see a movie. It must have been 1973, because the movie in question came out in December 1972. The details are sketchy, but Otter wanted/mom insisted I had to go too. He convinced me it was a cowboy movie. The title seemed right -- The Legend of Boggy Creek. We walked the several blocks to the theater (get that kiddies -- walked) and paid the price. I think Otter may have met some friends there. OMG, it was not a cowboy movie. It was about a monster that terrorized a small Arkansas town.

That movie scared the shit out of me. I can still remember that hairy hand trying to grab that guy of the crapper -- right through the window! I literally had nightmares about that movie for at least two years. Sometimes I still have them. 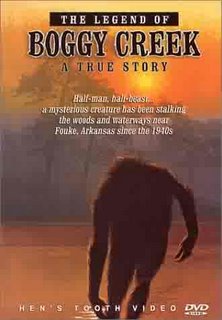 I dreamed about the monster from Arkansas last night (not Hillary -- the bigfoot from the movie).

All my kids love horror movies. I refuse to watch. Many people like those kind of thrills. Not me. I fear Otter ruined me for life.
Posted by Joe at 8:00:00 AM