There are movies that as you are going through the channels, bored on a Sunday Afternoon, you just have to watch. Cool Hand Luke is one of those movies that gets me every time. This movie remains one of my all time favorites, and I can never watch it enough. Paul Newman gives an Oscar-worthy performance, and George Kennedy is terrific as Dragline (Newman was nominated, Kennedy won).

Luke is sent to serve time on a chain gang for cutting the heads off parking meters in an act of drunken rebellion. He shows a steak of stubbornness and boredom throughout the movie. The scene with the eggs, the fight and his perverse 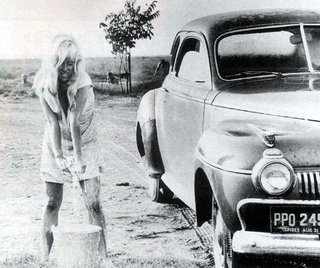 determination to run away all show a rebelliousness centered on what I think is boredom. The most famous scenes from the movie are the Captain explains "we have a failure to communicate", and the car wash scene. Joy Harmon was the tease washing her car, one of the sexiest scenes ever filmed. She appeared in only three other movies, and later opened Aunt Joy's Cakes in Southern California.

Along with Outlaw Josey Wales, Cool Hand Luke is one of those films with rare channel surf-stopping ability. What film gets you every time?
Posted by Joe at 1:23:00 PM