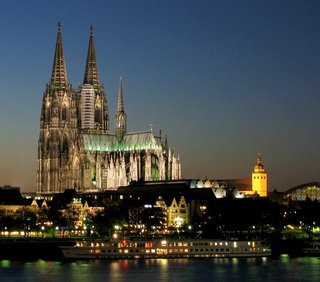 I am sitting here eating a rare breakfast,

No,no, that did not start out right. The breakfast was not rare, it is just that I rarely eat breakfast. I was eating fresh pineapple, orange juice, coffee and one Archway sugar drop cookie this morning and I was thinking about the trips I have planned in the next weeks. As you are probably aware, I am a traveling salesman. Sadly, I have yet had my car breakdown on a country road and had to spend the night with a farmer and his beautiful daughter.

I have been lucky enough to travel the world on the company's dollar. I have seen the Cathedral at Cologne (that is it,above), the Eiffel Tower, London, Amsterdam. I rode a train through the Rhine Valley, marveling at the castles of old. I ate lunch at a picnic table along the Danube. I drank beer beside the mountain lakes of Austria.

I spent a week in Tours, the site where Charles Martel kicked Muslim ass and saved the West from becoming the Middle East. Where are you now, Hammer, we could use your kick ass mentality, especially in France? The Cathedral in Tours is far more impressive than Notre Dame.

I have been to Mexico, Canada, Britain, France, Italy, Germany, The Netherlands, and Austria. I have seen New York City, the Vulcan in Birmingham, and the majesty of the Rockies. I have visited the Motor City, San Francisco, Philadelphia, and LA. I have attended the Indy 500 and seen the Cubs at Wrigley Field. I have sat for hours looking at the natural beauty of the Cascades and the Columbia River Gorge. I have swam in waters of the Pacific, the Atlantic, the Gulf of Mexico. I have touched each of the Great Lakes.

I have been to the Alamo, Gettysburg, Shiloh and Stones River. I have walked the hallowed ground at Antietam. I have traipsed the smaller battlefields at Perryville, Tippecanoe, Fort Pillow and Spring Mill. I have seen the memorials in the Nation's Capital and found myself awed by the sad grandeur of Arlington National Cemetery.