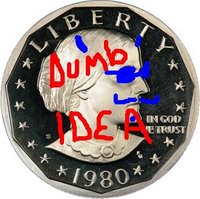 I see the Government is at it again, pushing another dollar coin down our throats. I venture this effort will be greeted with the same excitement that was generated by the two dollar bill, the Susan B Anthony and the Sacajawea dollar -- none. Coin collectors will be all abuzz, and I am sure my Mom will try and get one of every President to give my Kids.

I will not use it. You probably will not either. On my dresser resides a jar full of change. Periodically I take it to the bank or grocery to trade the coins for dollar bills -- yep, paper money. I detest the rattle and bang of coins in my pocket. They are heavy and noisy. I empty the change into the jar at every opportunity. Often I need a few pennies, but I would rather get ninety seven cents back than carry around the spare change.

I have been to Europe and Canada, where men have to carry special change purses and wallets to accommodate the heavy lower denomination coins. They hate. So did I. As evidence, I would rather wait in line at the post office than use the stupid vending machines in the lobby that only give out Sacajawea change.

So my not so bold prediction -- this coin will lay in the vaults at the US mint, unloved and unwanted next to his cousins the Ike and Kennedy Dollar and Half Dollar, the Susan B. and Indian Princess. They will be there in their canvass sacks clinking and lonely until the Government forces us to abandon the beloved greenback dollar. That will only happen when they stop printing them.

Write your Congressmen and Senator and tell them you are sick of the mint and its stupid tax-payer wasting ideas. Of course, short of hitting the crooked politicians with a bag of one dollar coins, I doubt they will listen.
Posted by Joe at 12:20:00 PM