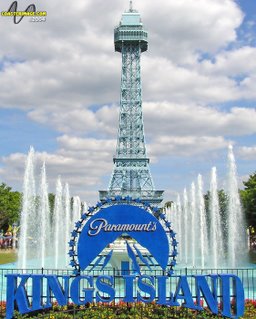 Excuse the improper spelling of any foreign words and phrases, I just do not care enough to look them up. You can read part one here. edit link fixed

It takes around ten minutes to climb the steps to just the first level of the Eiffel Tower. That sucker is huge. It is also brown, I expected it to be green. I don't know why, maybe because the little replica at Kings Island is green. That is it over there on the right -- the replica, that is. I am sure you have seen many pictures of the real thing ( if not, well I do not know what to tell you). In any case the real one in Paris is big and high, and it made me thirsty.

My engineer friend and I sat at a nearby bistro to have a cold drink. We had beer. And wine and more of both. We watched the sun set over the Seine. The next thing I knew Dave was muttering a big "shit" and looking at his watch. The last shuttle to the hotel left in less than an hour.

We were in downtown Paris.

This is a problem -- look it up on a map if you do not believe me. We high tailed it to the train station. As we headed down the steps to the underground station we realized the tickets we bought out at Chuck de Gaul airport were not round trip, but ONE WAY. We did not have tickets.

I saw a guy sweeping nearby. I rushed up to him. "Ecusez moi, parlez-vous Anglais?" He gave me a dumb look and said something I could not understand. For a fleeting instance the ugly American leaped into my mind "f-ing foreigners" I thought. I tried again "Parlez-vous Francais?" I figured I could get by with the French I had studied twenty years previously coupled with pigeon English and a strong smattering of Pepe le Pew. No dice.

Spreche Deutch? God, I hope not. I can only order "five beers, please" and say "airport" in German. I just got a shake of the head. Habla Espanol? Again a shake and a lot of jibberish. "Yo ne panamayo Parusky" I told him I could not speak Russian. I had no more success when I counted in Japanese. My language skills exhausted, I realized the guy was sweeping the subway at 10:00 on a Sunday night for a reason. He told me something else in what I supposed was Algerian. I am sure he said "Death to the Infidel" or something similar. Well "doom on you" too, asshole (do you know any Vietnamese? Say that one phoenetically if you want to tell someone to fuck off). The HB school for language is now closed, send your checks now please.

We raced down the hall toward the tracks, five minutes wasted in failed foreign relations. We came to a ticket vending machine next to the closed ticket windows. I was having a tough time translating, the beer was messing up that portion of my brain. In any case, All either of us had was large Franc bills. The machine would not even take the denominations we had. We found the right track, we had only about one minute before the train left. Typical inconsiderate Frenchies, putting everything in non-English (Hey, we are putting every public sign in Spanish). We had to take a decision now.

Yep, we jumped the turnstile. As we collapsed on the train we convinced ourselves if we were questioned by the police we would claim the truth --we wanted to pay, but did not know how. All of this was based on the assumption the cops could (or would) speak English, and that they gave a shit about our excuses. I could only begin to picture the scenes from Midnight Express in my mind. I had three little kids, a wife and big mortgage back in the States. I did not want to spend the night, or month or any time with smelly Jean-Jaques in a French prison. Hey, I saw Papillon, the Prisoner of Zenda and the Count of Monte Cristo, I knew how the Frogs treated their prisoners!

The train pulled without incident below the terminal at Chuck de Gaul Airport. We ran from the train only to remember you had to put your ticket through the turnstile to exit the station. We jumped again. We raced up the stairs in time to see the shuttle pull away. I put my hands on my knees and my head down, breathing hard. I would just have to get a taxi. I heard Dave shout -- he had ran after the bus, pounding its side until it stopped. We were on our way back to the hotel.