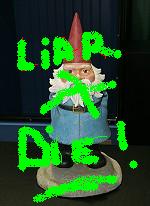 I have posted often about my disdain for the Travelocity Gnome commercials. The series that gives purported "travel truths" especially annoys me. The first instance busts a popular travel myth, the second myth is proven true by the gnome. What kind of message does this send to the unwary consumer? To me it says the gnome is a fucking liar and I should not trust Travelocity. What do you get from the commercial?

Now I have a new hated ad. Do you have Osterman Jewelry in your area? I think they are a national chain. In the spot that chaps my ass, a girl is describing her fiance's method of surprising her with the engagement ring. He put it in the microwave. She gushes that she "almost cooked it". I am not sure why this pisses me off so much, but every microwave I have ever seen you have to open the door to insert the dish to be nuked. Didn't this dumb gash see the little box? What did she do, say top herself as she shut the door, "I wonder what that little box was?" Did she reconsider as she pushed the key pad to set the time and temperature? Of course the whole thing is a petty lie, and she pisses me off because no one is so dumb they almost "cooked" a ring unless they are a stupid wench. The actress should have refused the work on general principal -- the ad is stupid and senseless.

The other one that set me off today also belongs to a Jeweler, the Shane Company. The moron that intones the ads is lame and boring, but today I swear he said gogleing (rhymes with the 'o' in bottle) instead of googleing (as in 'booty'). Maybe I heard it wrong, so I will not go further until I hear the ad again. Have you heard that one?

Finally, I am rocked to the core, first Jessica Simpson broke up with her husband. Then I hear Brittany Spears texted a break up with her man. Now, the most shocking and unexpected news" Pamela Anderson and Kid Rock have called it quits. Man, I thought that one was made in Heaven...
Posted by Joe at 12:28:00 AM