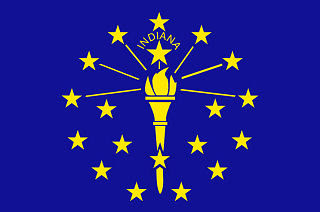 150 years ago today the fine citizens of this area became denizens of the Hoosier State. I bet you did not know:

Abraham Lincoln moved to Indiana when he was 7 years old. He lived most of his boyhood life in Spencer County with his parents Thomas and Nancy.

Explorers Lewis and Clark set out from Fort Vincennes on their exploration of the Northwest Territory.

The movie "Hard Rain" was filmed in Huntingburg.

During WWII the P-47 fighter-plane was manufactured in Evansville at Republic Aviation.

Marcella Gruelle of Indianapolis created the Raggedy Ann doll in 1914.

The first professional baseball game was played in Fort Wayne on May 4, 1871.

Santa Claus, Indiana receives over one half million letters and requests at Christmas time.

Crawfordsville is the home of the only known working rotary jail in the United States. The jail with its rotating cellblock was built in 1882 and served as the Montgomery County jail until 1972. It is now a museum.

Historic Parke County has 32 covered bridges and is the Covered Bridge Capital of the world.

True to its motto, "Cross Roads of America" Indiana has more miles of Interstate Highway per square mile than any other state. The Indiana state Motto, can be traced back to the early 1800s. In the early years river traffic, especially along the Ohio, was a major means of transportation. The National Road, a major westward route, and the north-south Michigan Road crossed in Indianapolis. Today more major highways intersect in Indiana than in any other state.

Most of the state's rivers flow south and west, eventually emptying into the Mississippi. However, the Maumee flows north and east into Lake Erie. Lake Wawasee is the states largest natural lake.

Indiana's shoreline with Lake Michigan is only 40 miles long, but Indiana is still considered a Great Lakes State.

More than 100 species of trees are native to Indiana. Before the pioneer's arrive more than 80% of Indiana was covered with forest. Now only 17% of the state is considered forested.

Deep below the earth in Southern Indiana is a sea of limestone that is one of the richest deposits of top-quality limestone found anywhere on earth. New York City's Empire State Building and Rockefeller Center as well as the Pentagon, the U.S. Treasury, a dozen other government buildings in Washington D.C. as well as 14 state capitols around the nation are built from this sturdy, beautiful Indiana limestone.

Although Indiana means, "Land of the Indians" there are fewer than 8,000 Native Americans living in the state today.

The first European known to have visited Indiana was French Explorer Rene'-Robert Cavalier sierur de La Salle, in 1679. After LaSalle and others explored the Great Lakes region, the land was claimed for New France, a nation based in Canada.

In the 1700s the first 3 Non-native American settlements in Indiana were the 3 French forts of Ouiatenon, Ft. Miami, and Ft. Vincennes. Although they had few settlers in the region, French presence in Indiana lasted almost 100 years. After the British won the French and Indian War, and upon the signing of the Treaty of Paris in 1763, the French surrendered their claims to the lower Great Lakes region.

Indiana was part of the huge Northwest Territory, which included present day Ohio, Indiana, Illinois and Wisconsin, which were ceded to the United States by the British at the end of the Revolutionary war.

Ft. Wayne, Indiana's 2nd Largest city, had its beginnings in 1794, after the Battle of Fallen Timbers, when General "Mad Anthony" Wayne built Ft. Wayne on the site of a Miami Indian village.

Many Mennonite and Amish live on the farmland of Northeastern Indiana. One of the United States largest Mennonite congregations is in Bern. According to Amish ordnung (rules) they are forbidden to drive cars, use electricity, or go to public places of entertainment.

At one time Studebaker Company of South Bend was the nation's largest producer of horse-drawn wagons. It later developed into a multimillion-dollar automobile
manufacturer.

Indianapolis grocer Gilbert Van Camp discovered his customers enjoyed an old family recipe for pork and beans in tomato sauce. He opened up a canning company and Van Camp's Pork and Beans became an American staple.

Muncie's Ball State University was built mostly from funds contributed by the founders of the Ball Corporation, a company than made glass canning jars.

Thomas Hendricks, a Democrat from Shelbyville, served Indiana as a United States Senator, a United States representative, governor, and as Vice President under Grover Cleveland. Indiana has been the home of 5 vice presidents and one president.

Peru Indiana was once known as the "Circus Capital of America".

Indiana University's greatest swimmer was Mark Spitz, who won 7 gold medals in the 1972 Olympic games. No other athlete has won so many gold medals in a single year.

In 1934 Chicago Gangster John Dillinger escaped the Lake Country Jail in Crown Point by using a "pistol" he had carved from a wooden block.

Before Indianapolis, Corydon served as the state's capitol from 1816-1825. Vincennes was the capital when Indiana was a territory.

East Race Waterway, in south Bend, is the only man-made white-water raceway in North America.

In 1862, Richard Gatling, of Indianapolis, invented the rapid-fire machine gun.

The American Federation of Labor (AFL) was organized in Terre Haute in 1881.

From 1900 to 1920 more than 200 different makes of cars were produced in the Hoosier State. Duesenbergs, Auburns, Stutzes, and Maxwells - are prize antiques today.

The Indiana Gazette Indiana's first newspaper was published in Vincennes in 1804.

Before public schools families pitched in to build log schoolhouse and each student's family paid a few dollars toward the teachers salaries.

At one time 12 different stagecoach lines ran through Indiana on the National Road. (Now U.S. Interstate 40)

In the 1830s canals were dug linking the Great Lakes to Indiana's river systems. The canals proved to be a financial disaster. Railroads made the canal system obsolete even before its completions.

Indiana's first major railroad line linked Madison and Indianapolis and was completed in 1847.

The farming community of Fountain City in Wayne County was known as the "Grand Central Station of the Underground Railroad." In the years before the civil war, Levi and Katie Coffin were famous agents on the Underground Railroad. They estimated that they provided overnight lodging for more than 2,000 runaway slaves who were making their way north to Canada and freedom.

During the great Depression of the 1930's 1 in every 4 Hoosier factory hands was out of work, farmers sank deeper in debt, and in southern Indiana unemployment was as high as 50%.

In the summer of 1987 4,453 athletes from 38 nations gathered in Indianapolis for the Pan American Games.

Comedian Red Skelton, who created such characters as Clem Kadiddlehopper, and Freddie the Freeloader, was born in Vincennes.

The Poet Laureate of Indiana, James Whitcomb Riley was born in a two-room log cabin in Greenfield. He glorified his rural Indiana childhood in such poems as "The Old Swimmin' Hole" "Little Orphant Annie", and " When the frost is on the Pumpkin".