Swing, and a miss.

I went to buy some tickets to send to a customer yesterday and while at the local Ticketmaster branch I bought some tickets for the local Triple A baseball team. The Indianapolis Indians play at Victory Field, one of the greatest places in the world to watch a baseball game. The whole family minus my oldest son, who had to work, plus my daughter's boyfriend attended the game. We had a great time. Is there a better evening spent than at the ballpark?

Three young couples and their kids occupied the seats behind us. The ladies spent the whole game yakking. One clearly was in the home party business. She spent the whole night talking how she needed one more booking to make her quota. She whined about this ALL NIGHT. She even called prospects during the game. The other ladies looked for excuses to get away. They took turns taking all of the kids (4-5 of them) from babies to maybe 4 years old for walks. This bitch droned on on on. When the other ladies were not around she droned to her husband. A stuck record was more entertaining. I expect people to talk during a baseball game, not everyone is as interested in the minute flow of the game as I. But you would think this woman would pay attention for at least one second. By the fourth inning my son leaned over and said " If she could just book one more spa...". What a bore this woman was.

In all we had a great time. Since my oldest did not get to attend, here is one of my favorite pictures of him taken when he was just a little guy. 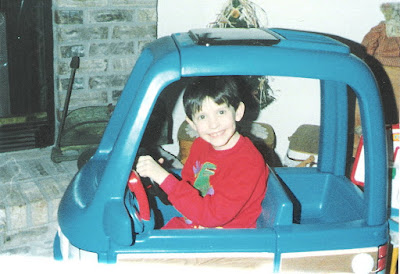 That myspace page a few posts below? That is him playing every instrument on every song. He is just learning to write songs, but he is getting better.
Posted by Joe at 8:50:00 AM