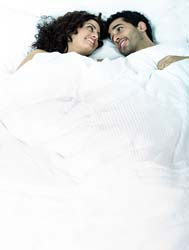 A man and his wife hit the sack and just as she turned out the lights he cut a massive fart. She told him that was sick, and he replied "7-0", my lead.

The husband fumed. His little joke was being turned on him! He strained and pushed in a vain effort to get a little gas of any kind. He swallowed air, he pushed until he was sure to get swollen hemorrhoids. Suddenly he farted the fart of all farts and actually shit in the bed.

"What the hell?" screamed his wife, "I cannot believe you just crapped in the bed."