Historian Barbara Tuchman once opined that research is endlessly seductive, writing is hard work. For me that is undoubtedly true. I love research. I used to get lost in the library, one book leading to another until I was completely off my subject and reading Josephus or Tacitus or Livy. I was off task and loving it. The Internet has only made such forays easier. No more card catalog, no more reading of moldy tomes. Now you can go right to the key passage with a few strokes of the keyboard.

I have spent a good portion of the last six months reading about the Napoleonic Wars. I reread the entire series of Aubry/ Maturin books (20) and I have been rereading the Sharpe books since the first of this year (I am in the middle of volume 21, the final book so far). In providing the links for the post below, I reread The Duel. The movie and the short story both refer to Joseph Fouche. I vaguely knew the name, but the details escaped me. Off to the Internet I went.

I began my search at the notoriously inaccurate Wikipedia. It may be wrong a lot of the time, but like any encyclopedia, it is a starting point. While reading up on Fouche I was led astray reading about the French Revolution, The Reign of Terror, Murat, Robespierre, and the Jacobins. The French took the concepts of Liberty, Fraternity, and Equality to new levels. They outlawed religion, changed the calendar and went so far as to propose that money and wages be abolished. The whole concept sounds a lot like the principles espoused by Karl Marx fifty years later.

Based on my research I have prepared a little quiz for you. What do the French Revolution, The Russian Revolution, Hitler and the Nazis, The Cuban Revolution, The Cultural Revolution in China, The unification of Vietnam under the North Vietnamese, and the government of Pol Pot in Cambodia all have in common?

In each and every case the existing government was displaced by leftist/socialist/communist types. The goal initially in these Revolutions was to lessen or eliminate the gap between the classes. The new governments want to feed he hungry and clothe the poor. They ended up trying to eliminate everything that made us different. No one could be better in any way. The end result was not bringing the lives of the citizens to a higher level, but lowering the standard of living of all to the lowest common denominator. Everyone became poor (except those in power). Eventually the rich, the educated, the religious, the opinioned, the powerful, the Revolutionaries themselves were eliminated. Ultimately, the power became consolidated to a few, the people to pay the price. The only way Socialism could be moderately successful was to eliminate anyone who might voice opposition. Is it any coincidence that some of the greatest mass murders in history have been socialists?

When you think about the future of our country does the idea of making the rich pay appeal to you? Do you think it takes a village to raise your children? Do you think we should rely on the government to provide health care, pensions, or maybe even wealth? Do you ever think that certain people 'make too much money'? At least two of the prime candidates for President believe some of these things. That is not to say they are potential mass murders. I will say they want the power more than anything, though. The further down the slippery slope of socialism we are led by the left, the progressives, the liberals, the communists, whatever they want to be called in this day, the closer we come to the Cultural Revolutions of the past.

Imagine if you lived in Russia of 1917, China of the 1930s, Cuba of the 1960s or even France of 1790 for a moment. What do you imagine your fate? Would you be a victim of the death squads or Madame Guillotine? Would you find yourself in the basement of Dzerzhinsky Square? Executed on the baseball fields of Havana by Castro and Che? Slaughtered by Mao or Pol Pot? Or would you face a life of squalor, of hunger, of ration lines for bread and toilet paper? Please tell me again what part of Socialism appeals to you? That philosophy has worked and made life better where in the world? Do you think that could never happen here? Have you seen the posters of Che in the campaign headquarters of B Hussein Obama? 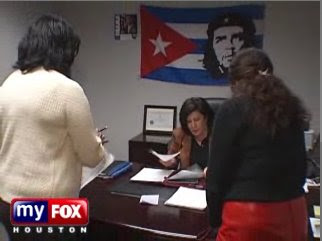 There is one other common trait among all of the leftist -- they want to take away your guns. I wonder why?
Posted by Joe at 8:25:00 AM