I originally published this on June 6, 2005. It is still appropriate.

"The most difficult and complicated operation ever to take place"
The above quote is by Winston Churchill. Joseph Stalin said
"The history of war does not know of an undertaking comparable to it for breadth of conception, grandeur of scale, and mastery of execution."

June 6, 1944. Not many under the age of 40, or maybe even 60, know the importance of this date. D-Day. The assault on Normandy, an operation that has never been equaled in the anals of history. The landing location was kept a secret, the Hun was stunned to the very core. Yet it was a close thing. Read the fine history of D-Day by Stephen Ambrose. Did you think Private Ryan was graphic? Read the words of the men at Utah, Gold, Juno, and Omaha beaches. 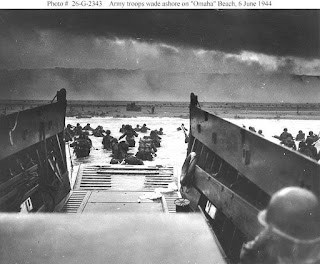 Nearly 175,000 Canadians, British, and Americans landed on D-day, at a cost of more than 10,000 casualties. We do not know for sure. It was only after several days of fighting that role calls were made, paperwork completed. Over 6,600 Americans were casualties, over 2,000 of those were on Omaha Beach and 2,500 were from the Airborne troops. These men sacrificed to save the world from the likes of Hitler. They freed Europe and saved France from its own traitorous Vichy Government.

"As the first men jumped, they crumpled and flopped into the water. Then order was lost. It seemed to the men that the only way to get ashore was to dive head first in and swim clear of the fire that was striking the boats. But, as they hit the water, their heavy equipment dragged them down and soon they were struggling to keep afloat. Some were hit in the water and wounded. Some drowned then and there... But some moved safely through the bullet fire to the sand and then, finding they could not hold there, went back in to the water and used it as cover, only their heads sticking out. Those who survived kept moving with the tide, sheltering at times behind underwater obstacles and in this way they finally made their landings. 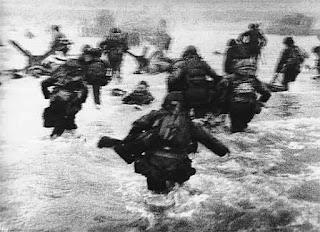 Within ten minutes of the ramps being lowered, Company A had become inert, leaderless and almost incapable of action. Every officer and Sergeant had been killed or wounded... It had become a struggle for survival and rescue. The men in the water pushed wounded men ashore, and those who had reached the sands crawled back into the water pulling others to land to save them from drowning, in many cases only to see the rescued men wounded again or to be hit themselves. Within twenty minutes of striking the beach Company A had ceased to be an assault company and had become a forlorn little rescue party bent upon survival and the saving of lives."


On the backs of these men and the rest of the "Greatest Generation" that we owe our freedom today. Thank God for them in your payers tonight.
Posted by Joe at 7:39:00 AM