Picture of a big lily in front of my house 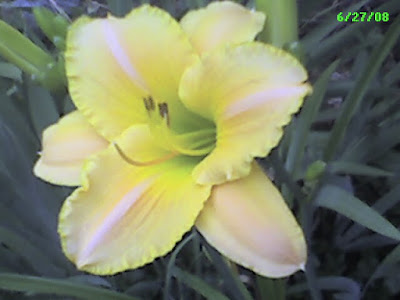 We payed the last regular league baseball game yesterday and won 13-3. We finished the season 7-4. I had hope to win one half of the games, so not too bad. Considering at one point we were 2-4, the boys really rallied. We finished in third place. The league tourney starts tomorrow. We got a bad draw, but we will see. They are capable of beating anyone if they play smart and hard.

Next up is All-star tryouts for the boy. He has played all-stars since he was 8. Last year was the first year since he was 8 that he was not a starter. This year it is going to be tough, only 5 kids per school district will be allowed on the team per IHSAA Rules. The boy is a very good fielder, but the coach likes the big strong power hitting type. The boy is a slap hitter in the Ty Cobb mold. He always hits the ball, but rarely does he get more than a single. We shall see what happens. If he does not make it, he will be devastated. He is better than some of the other players, but they are strong hitters. The decision comes down to do you want a player who is a good defensive player and hits .400 or better (but does sometimes hit into double plays), or a player that either strikes out or hits a boomer (with a BA of about .200)? I know what I would choose. I know what this coach has done in the past. The coach is a big guy and looks down on the skinny small kids. This is the first year the IHSAA thing has been a factor.

I am not sure what is going on with my sleep patterns. I keep waking up early, and that makes me tired early...I fell asleep in the chair at 10:00 last night and as in bed by 10:30. I have not been to bed before eleven PM in years.

If the rain holds off I will likely have to mow the yard and work in the flower beds today. Come on rain...