How I spent my Wednesday

If you were paying attention and reading with intense scrutiny a few days ago, you might have caught the fact there was a tragic death here at the old homestead. Since we all know my musings and writings are important and will be a key historical source in the future, I know you caught the paragraph. For those of you new to the genius that is Fat in Indiana, here is the post in question. Yes Bambi, Thumper fell over dead in my backyard.

I keep my garbage in two large 50 gallon trash cans. After three or four days, can one is full of Hefty Tall Kitchen Bags containing the Hoosierfamily trash and garbage accumulated each day. We then move to fill can number two. Wednesday is trash pick-up day in my modest subdivision. This important information, and yes, Johnny, it will be on the test.

Saturday afternoon I found the bunny lying dead in the grass near my deck. He was only moderately stiff. The flies and insect had not yet eaten out his eyes, but they were buzzing around in excitement. I am sure their little fly dicks were hard as can be over the prospect of gorging themselves on rabbit stew, minus all of the stew stuff. Anyway, I scooped up little Peter Cottontail with a shovel. Believe it or not, some thought went into the scooping instrument. Does one use a spade, a snow shovel or gloved hands to dispose of partially mortified Sylvilagus floridanus? I used a spade, BTW. After a cursory examination to see if I could determine the cause of death (CSI Bunny?), the critter was dropped into a garbage bag. I tied the bag extra tight and tossed the makeshift bunny coffin into one of my trusty Rubbermaid brand Roughneck fifty gallon trash cans. That bit of bagged bunny filled up the container. Out of sight, out of mind.

Let us now fast forward to yesterday. The garbage men came and did their collectiony thing. Some time later, I moseyed out to retrieve my garbage cans to put them back in the corner of garage. As I neared the curb I was assailed by the most odious odor imaginable. It was a low skunky clinging smell. It permeated your clothes, your hair, your mouth and I swear I could even hear it. It was strong. You guessed it -- it was the smell of dead and decaying bunny, stewing away in a tightly closed 50 gallon Rubbermaid brand Roughneck trash container, unopened for four days.

Gagging, I dragged the can to the side of the house and washed it out with the hose. The stink curled out of the can like a cartoon ghost and laughed at me. I sprayed a half of bottle of Fabreeze. I swear the stink got stronger. 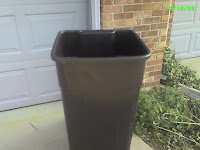 Right now the can is sitting outside the garage, sans lid. I dumped a whole box of baking soda into it. Let us see if the hammer and arm are more powerful than rabbit stink. We are supposed to have good weather for the next several days, so I hope Mother Nature's pure breeze and gentle wind will jump in like cheating tag team wrestlers and help out the baking soda.

I hope no more critters drop dead in my yard. If they do, I know where there is a dumpster nearby.
Posted by Joe at 8:27:00 AM