Big Z pitched a no-no for the Cubbies last night. Too bad it was not TV here in the sticks.

The Colts won a game they should not have (I am not sure that Addai crossed the plane for a TD either), and Denver stole one on the strength of a Ref's whistle.

I really, really hate the Cowboys. I bet there is an interesting bet between Kelly and Big Dick for tonight's game. Sorry Dick, but I have to root for the Eagles anyone playing the Cowboys.

Brett Favre's team was defeated by a QB whose last start was a high school game.

The weekend weather was not as bad as expected, but a couple of trees were downed in the neighborhood.

It is cloudy and cool today, whether we like it or not fall is here.

I found a dead rabbit in the back yard while mowing Saturday. There was no discernible cause of death, it looked like it was sleeping. I am pretty sure it was the same rabbit that hid in the bushes by my deck all summer. It was just a baby this spring.

My 2009 Sales Plan is due in a couple of weeks and I have not even started working on it.

Did you see that shot to the knee Charlie Weiss took? Boy, does Michigan look bad.

I have not had any bacon for a couple of weeks. I am sure that is a contributing factor to my short temper. I blew my efforts toward eating healthier this morning. I am having a Dr, Pepper instead of coffee.

We went out for a nice dinner last night to celebrate my Daughter's 22nd birthday. My wife is still trying in vain to get a decent picture of the kids to put into a picture frame my daughter bought her. Here are yesterday's failed efforts: 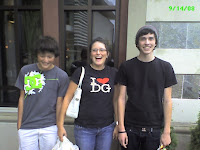 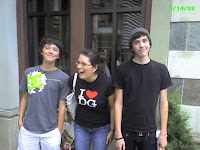 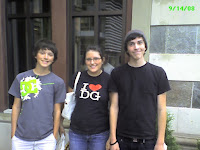 Maybe she can get a good picture with all three smiling and not making faces at Thanksgiving, but I doubt it.
Posted by Joe at 9:25:00 AM