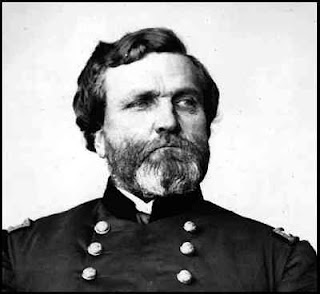 General George H. Thomas defeated and routed the Confederate Army of Tennessee under the command of John Hood at the Battle of Nashville on December 15 and 16, 1864. Thomas effectively destroyed organized Confederate resistance in the Western Theater.

Most of you have probably never heard of General George Thomas. Sherman said Thomas was the best General on either side of the War. Known as the Rock of Chicamauga for saving the Union Army at Chicamauga, Thomas was an able general. He took command of the artillery at the center of the Union lines at Stones River and was commander of Union Forces at the Battle of Mill Springs -- the first significant Northern victory of the Civil War. Thomas was beloved by his soldiers.

General George Henry Thomas was a graduate of West Point and served in the Seminole and Mexican Wars. A native of Virginia, he sided with the Union when Virginia succeeded. As a result, Thomas was disowned by his family and it has been reported that his sisters turned his picture to the wall, never to see him again. After the war his family refused money from Thomas.

George Henry Thomas is one of my heroes. My oldest son bears Thomas as a middle name in honor of this magnificent American.
Posted by Joe at 11:02:00 PM