I visited the Kings Mountain National Battlefield Tuesday afternoon. For those of you who have forgotten their 8th grade American history, Kings Mountain was a battle fought during the Revolutionary War. A British force of Tories found themselves surrounded on a ridge near the North/South Carolina border. The American or Patriot forces consisted of militia from North Carolina and a strong contingent of "over the mountain" men from South Carolina, Tennessee and Virginia. Both forces consisted of about 1,000 men. The forces of good and freedom (the Colonials) kicked the sorry British asses. It was an overwhelming victory. The British gave up on the hope that the war could be fought with "native" troops. Jefferson said Kings Mountain turned the tide of the war.

Here is the Memorial on top of the mountain: Here is the grave of Patrick Ferguson, the British commander: 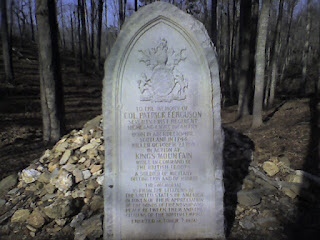 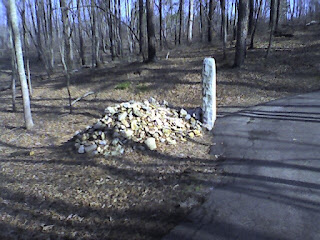 You should know how to make the pictures bigger by now.