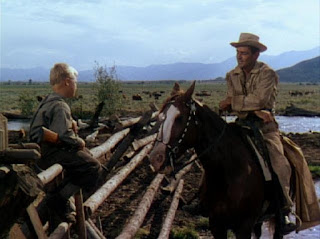 I watched Shane last night. I love that movie. The visuals are stunning and the story is quite good. I would like to punch the whiny kid right in the mouth, and the woman is annoying, but in all it is everything one could want in a movie, especially a western. I think some of the best westerns have a similar theme, the lone hero who sacrifices himself for the good of the whole. You see it in High Noon, The Lone Ranger, and later in The Shootist and Pale Rider. A similar theme is present in some of Louis L"Amour's westerns (think Kilkenny) as well.

Shane wants to give up his gunfighting past, but in the end it is up to him to save the homesteaders from the brutal rancher. I believe this idea resonated strongly with the post-war audiences. The movie is about loyalty, friendship and honor.

The story shows the rancher's view also. Sometimes in life there is no compromise. I love the fact that the director tried to accurately portray not only the life of the period, but strives for accuracy in clothing, the buildings and the language and culture.
Posted by Joe at 8:08:00 AM