Mainstream Muslims(if there is such an animal) have gone to great pains to tell us the suicide bombers and terrorists and Taliban-type followers of the teachings of Mohamed do not represent the true nature of Islam. Every time a Muslim male between the ages of 18 and 40 decides, in the name of Allah, to blow a pizza parlor or a disco, to fly planes into a building, to bomb an Embassy or hotel, to put an explosive into an airliner or bus or train station, to drive a TNT-loaded speedboat into a Navy ship, to attack a school, etc., etc., etc., we are told that they do not represent Islam. Yet every time one of these Islamic-fascists, who we are told are not really Muslims, does a depraved act of barbarous terrorism, we see thousands of what I guess are non-true-adherents cheering and partying in the streets?

Why is it when a Muslim soldier rolls a grenade into a tent, or murders a baker's dozen (and wounds 30 more) we are offered the excuse of he did not want to fight Muslims. We are told that this is not a war against Islam. Our Government has told us that repeatedly. We are told that we are at war against terrorist organizations and regimes who want to do us harm. That these people are all followers of Islam is a tragic coincidence. In mosques around the country we are assured that Islam is not at war with the culture of the West. If this is so, then why is it always offered as a lame excuse that "he did not want to kill other Muslims"? 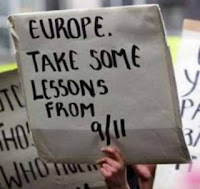 In previous wars Catholics did not declare they could not fight Germans or Italian Catholics and shoot up their fellow soldiers. Americans with Italian and German heritage felt no qualms about shouldering an M1 and heading for the shores of France or Italy. Yet for some reason we are supposed to accept that for a certain segment of the population it is OK to take Uncle Sam's dollar and decide later who you want ot fight. That it is acceptable to kill as many people as possible who may not agree with your decision. Somehow we have come to a position in this society where we can have post traumatic stress disorder before we even get the stress. Should we call this pre-traumatic stress disorder?

Here is what I think, there are people who put their religion first. Quakers feel strongly about the Ten Commandments and do not enter the military. Many Americans put their religion first. But it is unacceptable to put your religion first if you join the military. In today's armed forces the brave men and women who serve do so voluntarily. There is no draft. When Major Hasan took the oath to protect America from all enemies, both Foreign and Domestic, that oath did not say "unless they are Muslim".