It would be funny if it wasn't true 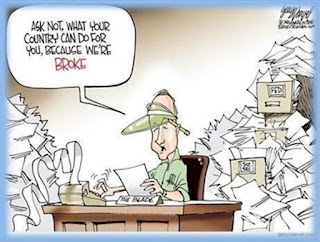 The Obama is out criticizing the Republican budget. He has nary a word to say about the Senate failing to pass a budget for more than 1,000 days. And Harry Reid has no intention of bring a budget to vote. Obama's last budget failed in the senate 97-0. He could not even find one Democrat to vote for his plan, even though the Democrats control the Senate (and budgets are filibuster-proof). The President's budget was defeated 414-0 in the House in March.

At current spending levels the Nation will be insolvent in about 15 years. Obama and his tax cheater-in-chief Treasury Secretary admit they have no plan to address the problem. "Tax the rich" is their parrot-like refrain whenever the subject is brought up. Your average sixth grader can do the math. If you tax 100% of income and assets for every millionaire, you get enough money to run the country for a few months. After the rich have given everything, what then?

Obama and the Democrats depend upon an ignorant electorate.
Posted by Joe at 9:12:00 AM

I tried to get this across when Glen Beck published that stupid book a number of years back: "BROKE" would be an improvement, what we are is BANKRUPT!
Insolvency is much worse than poverty.

You are absolutely correct.

So you think at current spending levels that we'll be insolvent in 15 years.

You sir are an optomist!!!

Just for the fun of it, I'd love to find that budget Obama submitted. It would have to be pretty entertaining to read a budget that every Democrat refused to vote for.

And then to hear him mock Ryan's budget!

I'd submit that we're insolvent now. The only thing stopping double-digit inflation is the ignorance of the general public.

Our fiat dollars are only worth what people think they're worth. Wait till people start thinking they're worthless. Can you say "Weimar"? Of course you can.