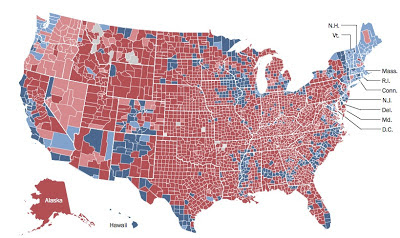 It is increasingly clear we are not a Red State / Blue State electorate any more. It has turned primarily into an Urban vs.Suburban/Rural battle. Obviously this is not completely true, there are large swaths of rural areas that tally up blue in places like the upper Midwest and Rocky Mountain areas of Colorado and New Mexico. But the trend is obvious.

Many Government services are more important to the urban dweller.  Public transportation is a good example. In addition, the number of people employed directly or indirectly by the Government of all levels is increased in the big cities. State capitols and government offices are not located in places like Mulberry, Indiana or New Bremen, Ohio. No one votes to eliminate their own job.

The question going forward is how can the GOP limited government types convince the people in the urban areas the money is not unlimited. How do we make them understand the vast areas of red have no use for publicly funded bike paths, light rail and neighborhood art centers?
Posted by Joe at 12:22:00 PM

When those red areas stop planting crops and go on welfare, then maybe the rest will get the idea.

I know this is perhaps a little off topic but I'd like your take .
I love how Pence /Daniels are already evaluating Ritz as highly ineffective. Interesting that she got more votes than any candidate on any ballot in Indiana.

Perhaps a little off topic, but here's some election map fun.

Anybody whom teachers love and want to be the superintendent of public instruction probably is going to be a massive waste of time. So Pence and Daniels are most likely correct that she's highly ineffective. Pence, thank goodness, is going to continue to push the legislature for more educational reform.

I'm so sick and tired of teachers and their hubris about how important they are to society that I wish I had kids of my own to home-school, just so I could thumb my nose at teachers. Teachers haven't been important to society since they started dumbing down and politically-correcting curricula and moaning about class sizes and how they were so grossly underpaid. With regard to the last, teachers convenient forget (or ignore) that they only work 9 months out of the year...and considering that school systems are having trouble making up 180-day calendars, it's more like six months. I work 240 days a year and get 20 days of vacation time, for comparison...which is why I make twice as much as most teachers. If ya wanna make the big money, teaching isn't where it's at.

Some of Bennett's education reforms are very good. Some things are way off base. A school cannot get a passing grade unless test scores improve year over year. A school can have a 98% pass rate, then fall to a 97.5% pass rate (1 or 2 students) and the school gets a failing grade. A local elementary school had 11 students out of more than 600 fail the test, and became an "at risk" school.

Some grade classes are smarter and comparing this year's third graders to last years third graders is crazy. Plus, it is impossible to continue to get better every year. Continuous improvement should be a goal, but reality has to play a part. Why not if 95% of 3rd graders pass the test the school gets an A. 90% a "B", etc.

One county school was graded "A" two years ago, "C" last year, and back to "A" this year. The teachers did not get worse and better in that span.

One emotionally disturbed child, or a few extra Hispanics in the class can put a teacher at risk.

I am all for vouchers, but the private schools should be measured to the same standards as the public schools if they take tax dollars.

Getting rid of tenure was a good thing. There is no doubt the role of the Union was to protect bad teachers (as all unions do). The Teacher's Union did themselves no favors in fight every single reform. But some of the stuff Bennett has put in place is wrong, and his refusal to compromise or listen to other opinions is what got him booted.

Most teachers I know understand they work 184 days and know the pay going in.

Much of this is "inside baseball" stuff. You would be amazed at some of the ridiculous requirements put on teachers and schools by the No Child Left Behind garbage. It is Big Government at its worst.

Fuzzy,
You work 60 days more than I do, therefore you should make TWICE as much as I do. Man, you did have a shitty math teacher.
Joe, thanks for the "insider" stuff.
I have to go over 2 dozen IEPs, a dozen 504s and several RTIs tonight and tomorrow. and here I thought it was the weekend. Not whinin' Fuzz, just sayin'

Teaching was your choice, no one held a gun to your head. Teacher salaries are not secret. Now before you get all upset, my wife just retired as a teacher, and I am well aware of all the bullshit that teachers put up with, since the spouse is not immune to the IEP's and other so called plans to nowhere. Teachers are not the problem, the system in place mostly created by teachers is the problem. Example, why is it that a Principal of a school has to be a teacher? Give me one good reason, Principals rarely if ever teach a damn thing. They are administrators, and most are pretty piss poor at that job. Take a step back and look at the whole reason for education. Does the product the schools are producing meet the needs of the country? The no child left behind act is a joke, some students are just plain fucking stupid. You can't fix stupid, no matter how much money you throw at it. Bottom line, is the cost worth the product we are producing? I know cold, but in the end that is the truth.
JOG