It has been pointed out to me in my comments and elsewhere that my political beliefs are a relic of the past. I simply a dinosaur in the modern world. Henceforth, I am going to try and get with the modern era. I am going to embrace the world of the modern progressive. I feel it is the right thing to do.

First off, let us look to the benefits.  I will not have to worry about government debt. We just need to get the rich to pay their fair share. We do not have a spending problem, too many people are trying to keep too much money from the government. Why shouldn't every American have access to basic necessities of life:  food, shelter, medicine, and cell phones? In fact, as a citizen of the world, it is selfish to think we should deny the wealth and benefits of our nation from those less fortunate.  Why are there artificial borders? Come one, come all, I say. Why should I have a better doctor or more food than a mother of eight in Mexico or Guatemala? It is not fair. We need a common sense approach. It is wrong for me to heat my house to 70 degrees F and use precious global resources when there are folks in the Congo and Panama who do not even have a furnace!

As a white guy, I have unfairly reaped the benefits of society. It is time I gave back. I have spent far too long focusing on my wants, it is time I received according to my needs. In truth, my ancestors received too much, since they were unfairly born white, so I should have to give back extra to society to make up for the past.

Going forward, I can see the benefits of a progressive society.  Not only will we raise the living standards all of humanity, but it will bring our community closer. I can finally really get to know my neighbors while we are standing in line to get our bread and toilet paper! 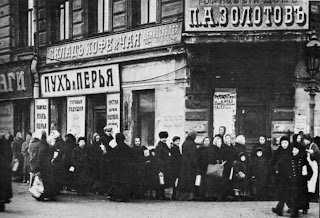 This is a view of  happy society in the old days of the workers paradise called the USSR. See how they get to spend quality time with their fellow citizens? Life was great until evil capitalists ruined things. F-ing Reagan. F-ing Bush. None of this suburban isolation in the glory days to come.'Community' is the word.We just need to be properly organized!

And look, here is a view of modern and progressive Cuba, where life is better in every way: 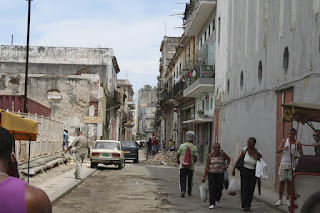 I am not sure why I am off to see my inadequate doctor this morning when I could be getting the best care in the world in Havana.

In fact,  I cannot wait until we start to build our own version of the "Berlin Wall" to keep out those pesky capitalists.

I can hear some of you itching to excoriate me in the comments.  You will argue that progressive ideas have failed in the past.  I used to think that way.  I cited example after example from history. But never before has the brightest, most charismatic Uberman of all been in charge. The Obama can lower the seas and cool the earth. Don't believe me?  Are we still having global warming? Exactly.  Point, game, set, match -- Righty MOFO.

Obama can make this work, if only the conservatives would abandon their greedy, white Euro-centric, bigoted, gun-clinging, gay-bashing, war-mongering, corporate-protecting, Bible-thumping, anti-women, tax-cutting, Hispanic-hating agenda and get with the program.

This is what your wife wakes up to every day of her life? Good christ. Remind me to send her a sympathy card.

You ought to put a warning at the top of this post: WARNING. CONTENT HAS BEEN KNOWN TO AGE READERS 10 TO 15 YEARS. READ AT YOUR OWN RISK.

What I wake up to everyday is people on the news telling me I need to pay more in taxes so people who refuse to work can see their food stamps to buy crap the want. I know too many food stamp queens so don't tell me that's not true.

From everything I've read, it appears your wife wakes up to someone who had led a responsible life and supported his family.

Amazing that lefties would always rather insult than face the realities of their policies.

Since all historic attempts at creating progressive societies have failed, lefties have nothing to support their arguments and thus default to insult. We can't possibly understand that this time it's going to work.

Doing the same thing over and over again and expecting different results is generally called "insanity". Thank you for playing.

Joe, I'm glad you can take a joke.

There is a reason I have a blog -- so my wife does not have to listen to me rant about this stuff!

I suspect you doubt my conversion to the Church of Unabashed Liberalism? I bet it is because I forgot to sound the cuckoo clock-like outcry against Fox News and/or Sarah Palin.

EOB proves a point, conservatives have come to expect attacks at any time, there is no conversation, no thought of civil discourse. The President has declared war on anyone that dares to disagree with him, its really a sad day.
JOG

Enforce the goddam Treaty of Greenville!

Ah, Joe, I see you drank that free sample of Kool-aid that came with the tax forms this year. Good man. See ya in line.