Answer to the Wednesday Quiz 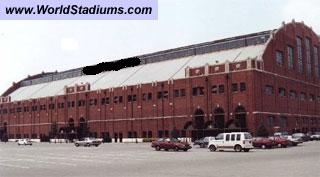 This is Hinkle Fieldhouse at Butler University. ESPN will air a documentary about the Fieldhouse beginning Feb. 10. The big "State Finals" scene in the Movie Hoosiers was filmed in this building. The actual Indiana Boys Basketball State Final Game between Muncie Central and tiny Milan was really played here in 1954. Hoosiers was based on this game. I have seen several games in this arena and it is a great place to watch basketball.

During the summer of 1987, Hinkle Fieldhouse again received national attention, this time as the site for the volleyball competition at the tenth Pan American Games. The largest crowd ever to see a volleyball match in the United States (14,500) gathered to see the United States defeat Cuba in the men's gold medal match.

When the Fieldhouse was originally constructed, it was the largest basketball arena in the United States, and it retained that distinction for more than 20 years. Recent renovation has reduced the seating capacity from 15,000 to 11,043, but the aura that made Hinkle Fieldhouse one of the nation's first great basketball arenas remains today.