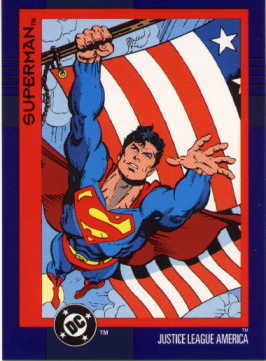 The little one dragged me off last night to see the new Superman movie. We attended the late show, so I am a bit groggy this morning.

The movie was OK, about what I expected. As usual the whole dual nature of Superman/Clark Kent is unbelievable. Superman is gone for five years. Clark is gone for five years. The day Clark returns to the Daily Planet, Superman returns. "Wow, what a coincidence" say the coworkers. Well, they do not even make the connection. Kevin Spacey is terrific as Lex Luthor.

Anyway, something that happened at the beginning of the movie ticked me off enough that I could not really enjoy the film. I will admit, I am of a paranoid bent. But how far does Hollywood go in their hatred of patriotism and America? The editor of the Daily Planet (surprised based on the NYT) has called a big meeting to tell all departments to get the story on Superman's return. He says "Does he still represent Truth, Justice, and that other stuff?"

Good gravy (ha - no swearing in this post!)the writers and directors and Hollywood crowd just cannot bring themselves to say it -- Superman has ALWAYS promoted Truth, Justice and the American Way.. Hollywood cannot deal with that truth. My friends, that is a sad reality.
Posted by Joe at 9:36:00 AM