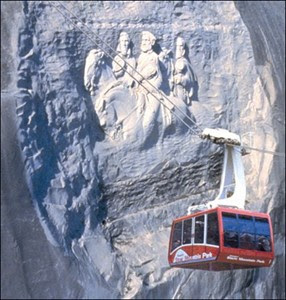 Stone Mountain, Georgia is this giant rock that pokes out of the ground near Atlanta. Internet sources I refuse to name claim it rises 825 feet above the surrounding plain. It is five miles in circumference. It is a big f-ing rock.

On the side of the mountain is a bas relief carving of three heroes of the Confederacy, Lee, Jackson and Davis. One could call it the redneck Mount Rushmore. One could, but I won't, it would be rude. You can ride a sky lift to the summit.

The family visited this attraction during a mini-vacation over spring break back in 1994. We hit Hotlanta and viewed the sites and this was on the agenda. We were checking out the area as my company was considering moving me to the Gainesville/Flowery Branch area. That is another post, we are talking about Stone Mountain here. The little one was really a little one then, he was not even a year old. The two oldest were five and seven. The little one was sleeping, so the wife stayed in the van with him ( the real reason was she was not remotely interested in Stone Mountain -- a sleeping baby was just an excuse) while I took the kids to the top.

We were riding to the top and the guide was talking about the carving. Since the kids were small, the kind people let us in the front so we could get a good view. The guide told us the carving covered three acres. The carved figures are nearly 90 feet tall. A man could stand inside a horse's ear. This sucker is huge. We are more than halfway up the mountain, the guide is telling us facts about the carving and I feel a tug at my elbow.

"I can't see it." says my son (5). The passengers move to give him an even better view. "I can't see it." even louder. I hold him up. Still he cannot see it. His sister, the guide, fellow passengers point to it. Talk about the inability to see the forest for the trees. The carving was so large he could not see it. He saw rocks, lines and shapes, but he was unable to see the carving. It was larger than his little mind could grasp.

We walked around the top and boarded the tram back down. Suddenly I heard a cry, the boy was pointing out the window. "I see a horse on that rock." he said. "Oh, there they are, three mans." I guess it is all a matter of perspective.

That young boy leaves for college this week. He is my cute little boy no more. He is a fine young man now. He is unprepared for life at college, for living on his own. He will survive. He will learn. At first, college will be like Stone Mountain, huge and imposing. In time he will see the details. He will succeed. I wish him joy, happiness and fun.