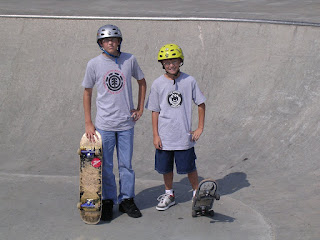 Here is a picture of my boys taken four or five years ago at the massive Louisville Skatepark. I present this image as today is the youngest one's birthday. He is 14.

We are taking the whole family out for dinner this evening. We will let the oldest boy choose the restaurant, since he is home from college for the weekend. Oh, and it is his birthday tomorrow. We will let the youngest choose on Monday. It is quite a hit to eat out two nights in a row, but it is a tradition we started many years ago. It was not too bad when they chose Chuck E Cheese or McDonald's. Now they want steak or the Cheesecake Factory. The oldest boy will be 19.

The little one had a few of his friends spend the night after the football game on Friday. Typical teenagers. When trying to determine how much pizza to order one claimed repeatedly he could eat a whole pizza himself. The others affirmed he could. The pizza arrives, he did not eat any. When pressed he finally ate two pieces. We ended up with a whole pizza in the fridge, that I will probably throw out on trash day.

I went to get some donuts for them on Saturday morning. I drove uptown to the bakery. On the way home I turned on the defrost, ran the wipers and finally pulled over to wipe of the inside of the windows since everything was blurry. It was at that point I realized I forgot to put on my glasses. Jeepers, who is really getting older in this house...
Posted by Joe at 7:51:00 AM