Free speech is one of the foundations of this country. It was deemed so important to the Founding Fathers it was listed as numero uno in the Bill of Rights. For the Founders, the ability speak out against the government, against tyranny, was paramount.

There does exist a fine line. The famous right to shout fire in a crowded theater does not exist. When does our free speech cross that line? When does criticism become sedition? When does protest morph to treason? Does your right to speech trump my right/desire not to listen?

There was a strong contingent who felt the Bill of Rights was not needed. The Rights of Man were too numerous to list, these men feared the enumeration of Rights would limit them. Read the Constitution, it is not a document that gives power to the Federal Government, it is a document that limits the power of the Government. The Constitution and the Amendments place limits on the Federal Government's powers.

Back to the point. Does Code Pink, moveon.org and religious wackos like Fred Phelps have a right to decry what they view as immoral, or just plain wrong? I guess. But when they cross the line of decency, urging soldiers to shoot their officers or protesting at funerals they have crossed the line of decency.

In times past such behavior would not have been tolerated. The perpetrator would have been ridden out of town on a rail. This is not just a corny phrase. 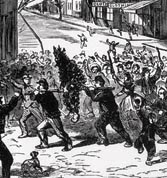 An undesirable person would have been placed upright straddling a fencepost or length of train track and jostled and bumped his painful way through and out of town. Often he would have been tarred and feathered first. This involved pouring hot, burning tar on the person and throwing feathers to stick in the tar. The concoction would be nearly impossible to remove without also taking off the top layers of skin. Humiliation and pain are strong motivators.

In days past, if an individual had the temerity to desecrate a funeral of a community's' young war hero, to cheer the death of a soldier, to cross the lines of simple human decency a family or community would have dealt with the manner in a clear and forceful manner. No jury in the town would convict such a response.

When did things change? How did we come to this? Was it the mass demonstration of the anti-war crowd in the 1960's? There were draft riots and anti-war rallies during the Civil War. The pacifist/ isolationist crowd was strong in the days of the Great War. Somehow they were able to make their point without spouting hate at innocent soldiers graves, without barring their sagging breasts to children. Lindbergh may have supported the Nazis, but he did not encourage common soldiers to kill their officers.

Why, as a society, do we tolerate such behavior? Why is sedition accepted? Why do we tolerate treason? Why do we turn our head to bad behavior? Why is it unaccepted to have community values? Why is it racist to insist those who break our immigration laws be punished? When did having moral values become an undesirable trait? When did bums and tramps and panhandlers become 'poor homeless persons'? Why do we have to let them live and bathe in our libraries and court houses and bus stations? When are we going to take back our cities and towns? When did a knotted rope become the ultimate symbol of racist hate?

The next time a Code Pink hippy drops her top she should be immediately arrested for public indecency. The next time a Phelps follower shows up at a funeral they should be tarred and plopped on the nearest rail. If a person gives aid and comfort to our enemies they should be tried and executed for treason. That includes you Cindy and you Jane.
Posted by Joe at 10:24:00 AM