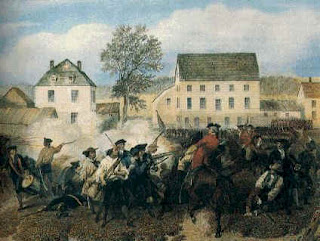 We have all heard the famous quote about those who forget history are doomed to repeat it. I will not reproduce it here because it is a load of crap. History does not repeat. We can learn some valuable lessons from the study of history that can be applied to modern situations though. Human nature does not change.

233 years ago today there was a group of hard working citizens. They loved their country. Their Government did not love them back. It stomped on individual liberty. It imposed burdensome taxes and regulations. The final straw was when they tried to confiscate the citizen's guns and ammunition. On April 19, 1775 The British Army marched to the towns of Lexington and Concord to seize weapons and powder. There, citizen soldiers stood up to the Government. "No more". they said.

By the rude bridge that arched the flood,
Their flag to April's breeze unfurled;
Here once the embattled farmers stood;
And fired the shot heard round the world.
--Emerson

In those brief moments of violence and death a nation was born. Our Sixteenth President said it best:

[O]ur fathers brought forth on this continent a new nation, conceived in Liberty, and dedicated to the proposition that all men are created equal.

It is ironic that the day we pay our taxes falls so close to the anniversary of the start of the Revolutionary War. A rebellion fought primarily over taxation and the overreach of Government. Take time today to give thanks you were born in the United States of America. Thank God your forefathers had the courage to fight for the freedoms we enjoy today. Reflect on the sacrifices made by the Armed Forces since in wars that have allowed the peoples of the world to drink from the cup of liberty and freedom.