Dude, where is my car?

The alarm came on this morning at the appointed hour -- 6:11 am. The voices of the radio jokesters brought me from a deep sleep. Rarely have I been in so deep a slumber. It took at least a half an hour to clear the cobwebs from my mind.

I just finished a couple slices of white toast, slathered in butter and apricot preserves. I also had a handful of last night's leftover popcorn. The true breakfast of champions.

As I read the news this morning, it occurs to me the single largest factor in the financial woes of the automakers is the contract with the UAW (in a quick aside I should say I do not blame the workers for asking as much as I blame the Management for agreeing to the bloated contracts). Anyhoo, it looks like the massive donations to the Democrat party have paid off, the UAW now owns the car companies along with the Government. The UAW worker keeps his job and loses not a penny.

I am excited, the last time a Government owned a car company it was Communism's monument to central planning -- the Trabant. The car of the masses. The Trabant had a two-stroke engine (think lawnmower) and was made with a composite material filled with cotton fibers. Sometimes, it is reported, the manufacturer used cardboard when steel was short. Here is some of the high-quality manufacturing used in the Trabant:

This is the kind of manufacturing you can expect when the car companies are owned by the same people who run the BMV and the IRS.

I can't wait to own the new General Motors UAW Trabant Malibu Obamamobile: 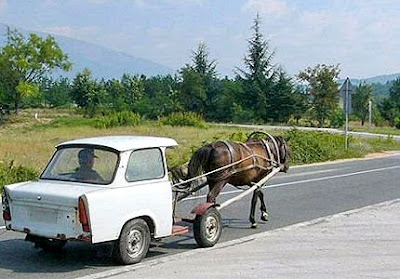