I filled up my favorite Peter Pan plastic cup with milk and added a tablespoon or two of Hershey's syrup. After a brisk stir I had the perfect accompaniment to my Stouffer's Mac and Cheese luncheon. Yes, it is good to be me. 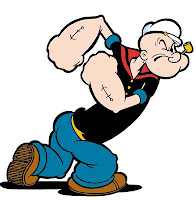 Since I was bored, I spent my whole lunch hour marching around like Henry Hawk from the Warner Brothers Cartoons: chest out, rear back arms a-swingin'. A brassy Dhhn dhhn dhhn music in my brainpan accompanied every step. Maybe the image of Popeye going to kick Brutus' ass better gives the idea. You should have been here, it was a hoot. Try it. You cannot be in a bad mood when you are marching purposely like a cartoon character.

Maybe, just maybe, I am going nuts. Perhaps it is Mad Cow disease. Do you remember when that was the big panic-scare-were-all-gonna-die health issue? You know, the swine flu of its day. What is really weird was we were hit with the big swine flu scare already, back in the 1970's. Hey! -- No fair recycling baseless panics! Maybe that is why The Obama and the willing news media are jumping on the let us call it A1N1H37G or some other nonsensical name. We do not want to offend the mooselimbs with the idea they may be diseased with a pork product! BTW, the first "American" death from the not-to-be=named flu was in fact a Mexican toddler who came to the USA to get treatment for his sooper sekrit (do not call it swine) flu.

The commercial that most irritates me is currently on the radio. This couple is in a bar bitching about the smoke. She coughs and asks why the place is not smoke free. He says he does not know, but imagine all the people that are dying right before their eyes. Think of the chemicals. Let's go somewhere else, not choked with smoke says he. The commercial ends with a claim about the millions hundreds dozens untold number of people who die in Indianapolis from second-hand smoke.

Let me be clear. I smoke an occasional cigar. Outside. At home. I do not and never have smoked cigarettes. In fact I find them annoying. But if person owns his own business, he should be the one to determine if a legal substance can be used there. If you do not like smoke filled restaurants -- do not go there. To be honest, I find huge doses of cologne and perfume far, far more disgusting than cigarette smoke. How about we ban those?

It is cloudy and cool today. Back to the jeans after wearing shorts the past several days. Happy hump day interwebz buddies.
Posted by Joe at 12:21:00 PM