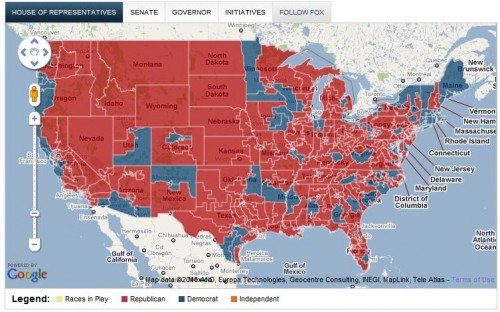 I am 48 years old.  I have been voting since 1980. In every election, other than those I did an absentee ballot, I have used an electronic voting machine. It is not hard. You push the button next to the candidate of your choice, and at the end pull a lever or push a button to record your vote. My long-winded point being that the process is not hard and not new in this part of the State.
In this mid-term election the ballot was thin: a few county offices (most unopposed), State Representative (unopposed), Congressional Representative and Senator. There was one ballot initiative and whether to retain some Judges. It literally took me less than two minutes to do my civic duty.
It took me more than 30 minutes to vote. Mostly because the idiots in line in front of me were clearly confused by the whole process. At my precinct there were but two machines. One guy spent twenty fucking minutes voting. How is that even possible? He did not ask, or appear to need help using the machine. I guess he just could not make up his mind. How can it take 20 minutes (actually 21) minutes to push a dozen buttons? Since the election was preordained in my county/district/state that the Republican candidate would win, I almost just left out of frustration. I stuck it out and did my American duty.
I will have some more commentary later. I am torn between taking the high road or doing a nah-nah told you so post.
Posted by Joe at 8:24:00 AM

I'm delighted with the results overall but disappointed in the very tight race which was lost here, thanks in large part to those two blue counties!

I was also pretty disappointed that the percentage wasn't higher in my county against the winner in our Congressional district. I don't get that. Maybe T-man's right: Stupid is...

Hopefully America is back on track. And hopefully those elected will be mindful that they were put there for a reason.

I was hoping to read what "Big Dick" had to say but he has joined the ranks of the bloggers gone on to myspace I guess.

I voted so quickly, the poll worker commented on it. I said I was a professional, I'd been voting all day.
Frankly, we had a poorly designed paper ballot, very confusing to a lot of people.

I miss the Hoosier voting machines, they were so simple. I tried the one here in Hawaii during the primary. Biggest POS ever. I couldn't figure out WTF it wanted. I've worked in the computer industry for almost 30 years and I've never seen such a pile. I used paper ballot for the actual election.

Hey Noah, thanks for the comment.Welcome.