Good morning Blog world. I hope your Thanksgiving went well and you managed to eat enough food to last a week.  I did.

The wife got a significant amount of Christmas shopping done yesterday. No, she did not hit the stores early. There was not much in the early-bird ads that appeared on the various wish lists. I know she was in heaven -- all day at the stores, the over-used debit card smoking in her hand. She wanted me to go with her, but I flat-out told her "NO" in no uncertain terms. Not only was I not getting in the middle of all those crowds (have I mentioned I really don't like people much -- except for you?), she really only wanted me to be her mule. I know how these things work.

Me, I put up one of the Christmas trees -- the big eight footer. Gosh, I am getting old.  I used to shoulder that big old box and lift it up and down from the attic over a six foot stepladder. Now I could not even lift it up the two steps from the garage floor to the house.  I had to have the boy help me.  Getting old sucks. I guess I am going to have to add strength training to my daily exercise. I will put up the little skinny six foot "Charlie Brown" tree later this morning. Then we have the drudgery of decorating the damn things. The wife bought new bows for the various wreaths outside, so I have to take them down so she can put on the new bows. 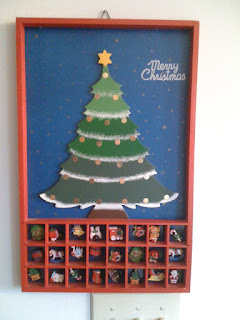 I turned on the outside lights last night, I am clearly biased, but I think the house looks good. Maybe I will try to take a picture and post it.  Maybe not. If you have not yet figured it out, what gets posted here is subject to my whim of the day.

For the first time in a couple of years I put our Christmas countdown calendar. It is a cheap wooden frame with a Christmas tree painted on it. The tree has a series of magnets.  Each day you take an "ornament"' a magnet of a drum or ball or present, and stick it to the big tree. There is a sleigh and Santa magnet for Christmas Eve. It is kind of a non-secular advent calendar. We have had it forever. The kids all loved it growing up, but it caused many fights and arguments when they started getting old enough to count backwards to determine who would get to put on the final magnet. We finally had to keep a note in the box so we could make sure each kid got a chance to put on the Santa in turn.

The wife hates this gaudy calendar with a passion, it does not match her country Christmas decorations at all.  I like the tradition, so I put it up while she was gone.  The boy was thrilled.  He mentioned he will have no argument about putting up the final magnet this year. I guess he does not think he will have to fight me over the honor. I may be old and weak, but I bet I can still kick his skinny ass. The first thing the wife said when she came home was "I do not want that thing up this year". I told her the boy wanted it up, so she reluctantly gave in.

If I said I wanted it up, it would come down at that very moment. I learned a long time ago the kids always get their way.

You won the battle but you know revenge is coming.

You're a sneaky one, eh?

Shit, you think your wife had the debit card smoking? The fraud protection department from our bank called the house twice Friday.