If you are not part of the problem, we have a final solution...

Why yes, here we have more examples of the Party of Tolerance. The people who wanted "civility" in the wake of the Gabby Giffords shooting, the enlightened ones.

Is it no wonder it is the lefties who have racked the highest scores in the destroy their fellow man pinball game? Former Pinball Wizards like Mao, Hitler, Pol Pot, Che, Trotsky, Castro, Lenin, and Stalin all played for the lefty team. Sorry to say, the Gulags and Killing Fields and the ovens of Buchenwald were the genius of the progressive mind. Wasn't it Obama's friend Bill Ayres that claimed we needed re-education camps in America? 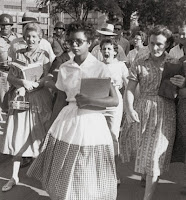 This is the written version of the self-same hatred we saw etched upon the faces of the crowd shouting down the little African-American girl as she headed to class in Little Rock in 1957. Oh, for the historically challenged,  it was Democrats who were for segregation. Democrats wrote the Jim Crow laws.

Diana Wagman opines in the LA Times she would not even allow herself to borrow a up of sugar or a few eggs from her Republican neighbors.


Next time I drive to our cabin, I'm going to make sure I take everything I could possibly need. I don't want to ask my neighbors for help. I hope it's their weekend to stay home.

Why this attitude? These neighbors have the unmitigated gall to be Tea-Party Republicans. The horror!

For the record, here is a list of accomplishments of the evil Republican Party:

Democrat Presidents were in office when we entered WWI, WWII, Korea, and Vietnam. Truman was also in charge at the beginning of the "Cold War".

Somehow, evil despicable Republicans should be vilified despite a record of environmentalism, civil rights and ending wars? Alice, reality called.  They want their looking glass returned.

h/t RobertaX  who says it so much better

My heavens, I'm blushing! Thank you, thank you.

Thanks to both you and RobertaX.

Try living in my world: I'm a white Republican and she's a black Democrat. For the last 20 years I've been telling her that the looney left is trying to keep her on the plantation.

Truths all, but I believe an addendum is order. Who ended WW1 and WW2? And that Iraq thing, who the hells idea was that? I think those WMDs are hidden in the FEMA trailers left over from Katrina.

Looney Left and rash right, how about the space in the middle?

Ed, you are a genius.