I’m a traveler of both time and space 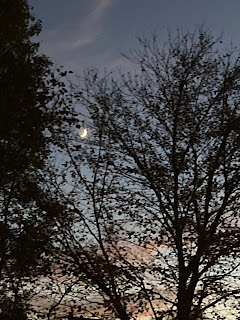 The moon was hiding behind the branches as I stepped out to the patio to grill up a couple of ribeyes. The day’s warmth was just lingering as I lit the burners.

We zipped down to the boy’s new house yesterday to help move a few last items too big for him to carry by himself. The house is small, but renovated in the past several years. His roommate seems nice. She has the place fixed up neatly.

The place is in the general Fountain Square area, and the neighborhood is poor, but the houses are taken care of; no junk cars in front yards, or boarded up windows.

We picked up a couple of things for the Granddaughters’ Christmas, came home and I fried up some breaded tenderloins. I made a pan of homemade mac and cheese and sliced up a few of the last tomatoes I picked from the garden before last week’s frost. A right feast by anyone’s standards. That is if you like comfort food.

I’m in the office the first half of the week. Day trips at the end.

There. You are caught up on the minutiae of my life. Riveting stuff, I wager.

Should you be carrying things since your foot is not healing? The food and mood sound great.