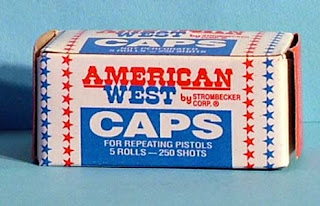 When I was a boy I had a replica percussion cap toy gun that looked like the gun used by Daniel Boone or Davy Crockett. Of course they used flintlocks, but this percussion cap replica was cool because it was made from wood and steel. It even had a metal ramrod. It came with a matching pistol, also made of sturdy wood and steel. The rifle fired those little red strips of caps in the pan. You had to load them one little square at a time, just like a real muzzle loader -- slow. Once, Otter swung this gun around and around and then let go of the gun hitting me in the back, I had a huge bruise. I probably cried. I did not rat him out, because he always found a way to convince me I would get into trouble. Older siblings always do that shit.

I had other guns too. I had a complete US Cavalry set that even had a toy sword. Sometimes Dad would take wooden garden stakes and nail a little cross piece so I could have a sword. We would sharpen it to a crude point. Everyone in the neighborhood had several toy guns. We played army all the time. It was never unusual on a summer day to see the neighborhood boys setting ambushes and fighting behind sheds, gardens and fence rows with their toy guns. Often a squad of these summer soldiers walked down the street carrying their mixed bag of weapons, looking for the enemy. I spent hours sailing the seas on our patio ship; the picnic table a sturdy quarterdeck. I shot imaginary redcoats and slaughtered filthy Japs and Germans by the thousands. My bike was a swift horse, a croquet mallet was a battle axe. Lawn darts were perfect hand grenades. So were rocks. It is what boys did. Later we graduated to real guns and shot rabbits and squirrels.

You cannot find toy guns in a toy store much anymore. You never see kids walking the neighborhood looking for Indians, Rebels, Nazis or damn Commies to shoot. If you do see a gun it is painted a bright orange to show it is a toy. They started that crap when we were kids. They put a screen across the barrel. We took a drill and drilled it out so the little black snub nosed revolvers looked more real.

The hippies are slowly winning. Kids do not play army any more. I never hear the pop of caps outside my window. We do not keep score at soccer games (hell, kids play soccer). We cannot see Bugs Bunny and his pals on TV, the cartoons are too violent. Fights in the schoolyard are now an infrequent event. Schools preach non-violence and peaceful dialogue. When I was a boy nearly every boy carried a pocketknife. Now you would be expelled for the semester and charged with a felony if you carried a pocketknife to school.

We are raising a generation of pussies.
Posted by Joe at 8:56:00 AM