Oh Momma, I’m in Fear for My Life

I was in the thicket behind my grandmother’s house. I had wandered down past where the alley cut through and into the small meadow beside Prairie Creek, near where the old interurban bridge footings were.

It was summer and as was the case most of the time in those days, I was barefoot. I suppose I was eight or so. I had skulked through the trees, stopped to eat some black raspberries from the secret patch where grandma gathered them to make pie, and was heading down toward the creek to watch the water.
I don’t know why, but something made me look down and there, sunning on the path, was a snake. It was about three inches from my big toe. The serpent’s body was a thick cable of muscle, black with yellow stripes. This cobra black mamba copperhead cottonmouth rattler was rearing up to sink its fangs deep into my foot. Or not. I didn’t stick around to find out. I sprinted away as fast as my skinny legs could carry me.I am sure I set some Olympic running records that summer afternoon as I burst into my grandma’s back door, out of breath and in near panic. That poisonous snake might have killed me. I’m not sure it didn’t chase me most of the way.
I eventually got over it. Later I decided I had come across a Plains Garter Snake or maybe an Eastern Garter Snake. Despite my faulty, terrified memory, it was probably only about three foot long. But given I was probably only just over four foot tall, it seemed pretty big to me.
So yes, at the time I feared for my life. Snakes do that to me. 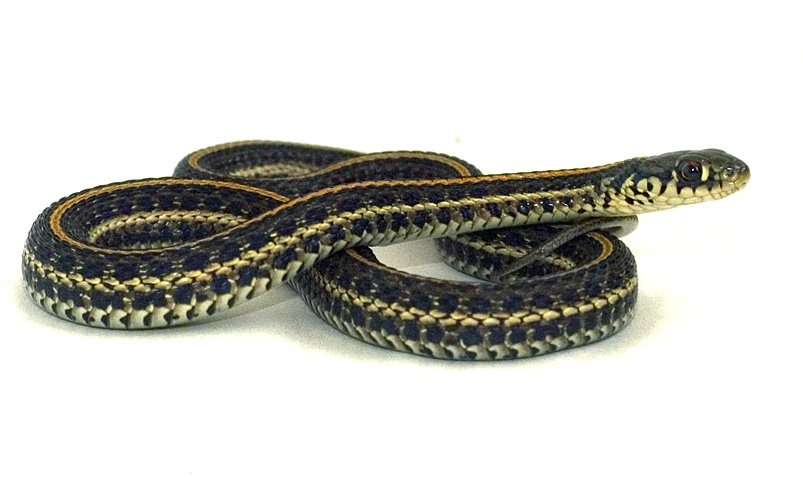 My grandmother's farm, just outside of Westfield, was located across the road from what is now called Cool Creek (it was Stink Creek (or 'crick') back when I was kid. One summer when I was staying there my cousin and I crossed the road to play in the creek. We were of course barefoot. After a while we got bored and headed up the grassy hill on the other side to take look at the neighbor's house at the top. My cousin, who was walking about 7 or 8 feet in front of me, suddenly turned and came running down the hill screaming at the top of her lungs. I had no idea what had happened, but suddenly the grass parted about two feet in front of me and a big, fat, dull black snack came slithering through and passed in front of me without stopping. Yup, it was a cottonmouth, heading down to the creek. We never played in the creek again (and later watched another big one swim down the creek while we stood looking down from the driveway bridge that crossed it).

There really are absolutely no good reasons for snakes to be.